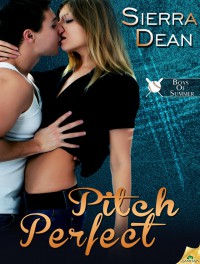 I hate admitting this, but my love of Dean’s Secret McQueen series had faded over the last few books, and I was reluctant to read anymore of that series. But while talking one night on Twitter she told me she had a contemporary sports romance coming out and I was so excited at the opportunity to read it. And I’m so glad I did!

Emmy’s dream job has always been to work as the head athletic trainer for a major league baseball team. Now that her dream has come true, she knows that baseball season is going to be full of sprains and aches and a grueling travel schedule. The last thing she has in mind is a romance that could potentially ruin everything she’s worked for.

Tucker is nowhere near old, but in baseball years he is getting up there. Coming back from a season off and major surgery has him scared, and he fears being just another washup. But with Emmy pushing him to be better, and the threat of leaving the only team he’s ever played for and loved, Tucker will take Emmy’s advice and do everything he can to succeed. The only problem is, he’s found that Emmy is his new lucky charm, and he doesn’t want to let her go. Ever.

This book had such a wonderful slow building romance. At the start of this book, Emmy is new to town and still has her boyfriend in Chicago. Although the attraction to Tucker is off the charts, Emmy does her best to push Tucker away at every chance. They start with a strong sexual attraction, and develop a wonderful friendship over time. It isn’t until at least halfway through the book that Emmy breaks up with her Chicago boyfriend and admits to herself she wants to take the chance with Tucker. That slow building romance was so well done, and I adored it.

I loved the way Dean portrayed Emmy’s character, especially once she was featured in the paper without her knowledge or approval. I loved that she hated the fact that a spotlight had been shown on her for being the first female head trainer in the MLB, and how upset she was that people would now possibly question her abilities. I thought it showed not only a strong strength of character, but also some vulnerability to her character that shined bright.

Tucker was wonderful as well. Despite the fact that Emmy was constantly pushing him away, he still did everything he could to support her. He was a friend when she needed, a support system, and when the time came, a lover. Although he was struggling with his own issues, namely getting his game back, he was also quick to focus one hundred percent on Emmy, and make sure that she was well taken care of.

The secondary characters, especially the guys on the Felon’s baseball team, were all fabulous. I loved how different and unique they all were, how large their personalities were, and how well they meshed together. I can’t wait to dive into the next book and read about Alex, Tucker, and the rest of the guys.

I am not a huge fan of baseball. While I love going to a live game and getting a cold beer and a hot pretzel, I’m also not a die-hard for the sport. That being said, I thought Dean did an incredible job of making the sport come alive. So many times in sports romance books the plot takes place off the field for the vast majority of the story. With Dean, the sport itself was just as integral to the book as the romance. The day to day grind, practice, working out, and the energy of the game itself was just as strong of a character as Tucker, Emmy and the rest.

All in all I found this book to reaffirm my love of Sierra Dean. The romance was exactly what I was looking for, and the added bonus of the strong friendship between Emmy and Tucker was wonderful. The baseball way of life and the players within it pulled me into their world and I was sad to see it go. I’m anxious to read more about the Felons.
I give Pitch Perfect a B.
Tweet