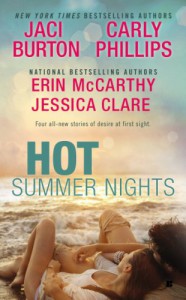 I really enjoyed this anthology, and most of these authors are on my auto-buy list. I was especially excited to read about Burton’s new contemporary romance series, and I can’t wait for more!

Hope Smolders by Jaci Burton is the start of her new Hope series, which I’m super excited to read more about. Jane is a single mother, whose husband left her with two kids and more problems than she ever expected. The last thing Jane thinks about is having fun on her own, as her kids, their finances, and keeping her jobs stays a large priority in life. Her ex-husband’s friend Will is determined to show Jane a good time, especially since he finds himself attracted to her.

I liked this story because it was such a great second chance story. I felt so bad for Jane and all that she had to go through with her horrible ex-husband, and although Burton made him extremely unlikable, it didn’t feel like it was done to make Will better. I love the romance between these two because it was a balance between sexy, flirty, and innocent. They seemed to spend as much time alone as they did becoming their own little family, and I loved that. Burton also did a great job introducing the fabulous characters-to-come in the Hope series, and I’m so excited to read more.

I give Hope Smolders a B+

Perfect Strangers by Carly Phillips is a new edition in the Serendipity series, and probably my favorite story in the anthology. I love the town of Serendipity, so getting a chance to do a quick re-visit before the next novel was fabulous. This book tells the story of Alexa, who falls instantly in lust with Luke at the bar one night. The chemistry is off the charts, and although they do nothing more than share a sexy dance, you can tell these two had a love-at-first-sight moment. I usually find it difficult to find stories like that realistic, but something about Phillips writing always convinces me, and I adored this story.

I think the other thing I really liked was that this story took place during the same timeline as the last full length novel, so we got a chance to see things from a different perspective. It was fun and different from Phillips norm. I would really love to see someone who doesn’t usually enjoy love-at-first-sight books five this one a try, because I think Alexa and Luke do a damn good job of convincing themselves, each other, and the reader that they will make it in the long-run.

I give Perfect Strangers an A

Legend of Jane by Jessica Clare was one of the stories I was most excited about, and ended up liking the least. I’m a die-hard fangirl of Clare, so the fact that I didn’t really connect with this story was a bit of a let-down. Jane AKA Luanne does wild and wacky things for her blog to supplement her income while she is out of work. Being arrested by a local sheriff opens her eyes not only to the possibility of love, but also the harm her new career is having on her family.

I thought Luanne was kinda annoying, refusing to listen to anyone tell her something negative about her blog, all the while she bitched about it every chance she got. It seemed a little out-of-character that someone who was willing to go to such lengths as “Jane” wouldn’t be willing to do the same on her own in the field she really wanted to work in. I just didn’t enjoy this story as much as I hoped.

I give Legend of Jane a C

The final story, Ice Princess by Erin McCarthy was a cute winter romance. Chelsea and her boyfriend broke up right before their romantic weekend, and Chelsea makes the best of it. After falling into the arms (quite literally) of a local hunk, Chelsea thinks things might be looking up. Especially when said hunk turns out to be her sky instructor. From that point on, Chelsea is given the chance to learn more than just how to navigate the slopes.

I thought this story was cute, but I also felt like Chelsea and Brody rushed a bit with their vacation romance. While they didn’t profess their undying love for each other after the end of the weekend (thank god) it did seem as if they were quick to think things would work out after only a weekend together. In many ways their situation was similar to the Phillips story, and yet I just didn’t believe in it as strongly. However, it was a cute and sexy story, as McCarthy usually delivers.

I give Ice Princess a B

Overall this was a strong anthology with well-rounded stories. I loved the chance to dive back into Serendipity, as well as get the chance to sneak a peak into the new world of Burton’s Hope. The contemporary romance fans will enjoy this great beach read.
Tweet