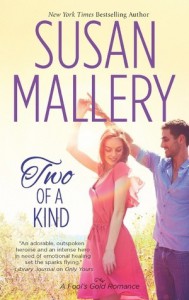 I was so excited to read Felicia’s story, because I loved that her character was so incredible smart, and more than a little socially awkward. She reminded me of the character TV character Bones.

Felicia didn’t think she would stick around in Fool’s Gold after helping to set up her friend’s business, but when she runs into her first flame, Gideon, and then begin seeing each other once again, the pull of the town is too much for Felicia to resist. Add in the offer of a new job in town, and Felicia finds herself pulled into and falling in love with the small town life.

Gideon likes the small town atmosphere of Fool’s Gold, but does his best to keep himself separate from the town. If he doesn’t get too close, then he doesn’t have to worry about getting attached. But with Felicia walking back into his life, Gideon discovers that there is something to be said about falling in love, with both a woman and his town.

Although this wasn’t exactly a second chance love story, since Felicia and Gideon never really had a chance to fall for each other after their first sexual encounter, in many ways this story felt like a second chance. Both Felicia and Gideon were greatly impacted by their one and only night together, and the chance to rekindle that spark between them was something that they were both excited about, and that excitement and tension came across beautifully.

I think one of my favorite parts in this story was the beginning, when Felicia and Gideon meet again for the first time. Felicia was caught off guard and out of her element, bringing out that sweet and innocent personality she had when she wasn’t overthinking everything. And Gideon got the chance to really see her, be swept away by her and take her out of her comfort zone. It was cute and sweet and so well done, that it might be my favorite moment in that book between these two.

Although I heard a lot of people on twitter talking about how nervous they were to read Felicia’s story, I loved and adored her. I have only read a few books in which the main character is too smart for their own good, but every book I have read has blown me away. I love watching Felicia’s thought process as she blurts out the random information in her head, and then realizes that she has lost everyone else, and fights with herself to fit within the social norm. I also loved that her friends didn’t want her to change. They loved her random facts, the way her brain processed things, and her ability to blurt out every thought. I loved it about her too and way so glad to see that she had support from other strong female characters.

Poor Gideon was a tough nut to crack. I wasn’t 100% pleased with the way his story went. I don’t want to give anything away, but Mallery certainly threw me for a loop with the introduction of a sub-plot that I was absolutely NOT expecting. And because of it, I felt as if Felicia and Gideon’s relationship suffered, just a little bit. I wanted to get a chance to see them rely on each other more, instead of focusing so much of their time and energy on this secondary point.

All in all I did really enjoy this book in the series. I loved Felicia, thought she was such an incredible heroine, and I loved the way she had to navigate between her book smarts and lack of social skills. While I never really felt as if I got to know Gideon as well as I would have liked to, the relationship between him and Felicia was rock solid by the end of the book, and I couldn’t ask for anything more.

I give Two of a Kind a B.
Tweet