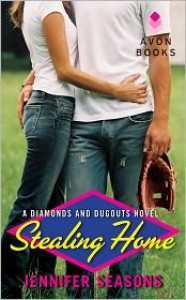 I love my sports romance books so when I saw that Avon Impulse was starting a new series with a new author, I was super excited.

Lorelei is desperate for some cash to help pay for the life saving surgery her niece needs. When she is approached to steal something from baseball’s apparent bad boy, she is willing to do just about anything. But stealing Mark’s good luck charm is not going to be the easy task she originally thought, especially after Mark catches her and demands she stick by his side until it’s returned.

Mark is just a little tired of having women throw themselves at him. He thought Lorelei was different, but he was quickly proved wrong. Not willing to lose his good luck, Mark keeps Lorelei close until he can get back his charm. The more time he spends with her, the more he finds that he might have been right about her the first time.

Although this book definitely had its corny moments, I really enjoyed the story overall. My love of sports romances was sated beautifully in this book, as we got a lot of moments to see Mark play, feel his love of the game, and see the effects that his career had on his life. I adored it. I’m not usually a big baseball fan, but I was definitely a Mark fan at the end of this!

I liked that Mark was a little fed up with the way his life was portrayed in the media, that he was ready to look into settling down, but was also aware of just how difficult that task would be given his lifestyle. I could tell he wanted more, and it came across well in the story. I felt bad for him, especially as we discovered more and more about his bat-shit crazy ex. I definitely wanted Lorelei to do a little bit more groveling at the end, because I felt like Mark deserved it.

I had a little bit of a harder time connecting with Lorelei. I was able to see where she was coming from in relation to her niece, as I would do anything to save my son’s life. However, I also thought she was extremely wishy-washy with her feelings toward Mark, Mark’s ex (who hired her to steal), and the fellow ballplayers. She seemed to be in constant limbo, not really knowing who to believe, who to trust. Even after Mark showed her with actions that he wasn’t the man his ex-wife and the tabloids made him out to be, Lorelei still hemmed and hawed about trusting him.

I really enjoyed the supporting cast of characters in this story. I’m anxious to read more about the other ballplayers. I was also a big fan of Lorelei’s brother, and I hope that we get to see more about him in future stories. Maybe even get the chance to see him find love again.

All in all I thought this was a great debut book by Seasons. I loved the way baseball played such an important role in the overall story. I loved Mark and his fellow players, and can’t wait to see more of them in coming books. For me, the biggest disappointment was Lorelei and her indecisive ways.