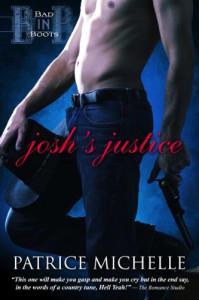 I found Michelle long ago when she used to write in the group blog with Ilona Andrews, Meljean Brook, Nalini Singh, and Jill Myles. When I saw she was writing a series of cowboy romance books, I was hooked. Who doesn’t love a smutty cowboy?

Sabrina is headed down to Texas to spend some time with her girlfriend. What she never expected was to fall in lust with the sexy neighbor, or get attacked on her second day in town. After a knock on the head and being trapped in a burning barn, Sabrina is taken under the wing of the ever sexy Josh Kelly.

Josh lusted over Elise, but when he meets Sabrina, all thoughts of the married Elise fly out the window. Sabrina is sex on legs, and the more time he spends with her, the more he dreads letting her go. As they get to know one another even better, Josh knows that Sabrina is the one for him. But with danger waiting in the shadows, there might not be enough to keep them together.

This novella was a great mix of both suspense and romance. There were some wonderful sexy times between Josh and Sabrina, and also just enough mystery to keep me engaged. Despite some of the suspense being put on the back burner during the romance moments, I think that part of the plot was what kept me extra interested in the story. Not knowing who knocked Sabrina out, who could want to harm her, or more accurately Elise, was a fun mystery to solve. I was anxious to find out who the bad guy was, especially as Michelle did a good job of covering the tracks of the real villain.

While I really enjoyed the romance between Josh and Sabrina, especially their intimate moments, I did think they were VERY quick to profess their love for one another. I find it hard to believe in the characters that fall in love within days, and while I was happy to see them do it, I also had a bit of a hard time believing in it. I would have been perfectly happy to see them take the next step romantically and leave it as a happy for now scenario. I do hope that Michelle continues to write in this series. I’m a big fan of my cowboys, and even more so when they are a little dirty. And yes, Josh was a little bit dirty!

I really liked the internal conflict that Sabrina dealt with as well. The added aspect of her father dying while fighting a fire, and falling in love with a fireman was great. Having to watch her overcome those fears, deal with that insecurity, and having Josh see it and try to meet her halfway was wonderful. I’m a big fan of that kind of internal drama within a relationship, and I thought Michelle balanced it wonderfully.

All in all I hope to see more Bad in Boots books. I like having the chance to read a short and wonderful story where I can count on a sweet romance, a lot of steamy moments, and a little mystery. Hopefully we will get the chance to see Josh and Sabrina again.