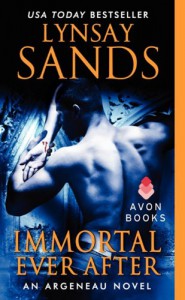 The Argeneau series was one of the first vampire romance series that I absolutely fell in love with. Now, Sands is on book 17, and I’m just now starting to get a little sense of repetition from the books. I was excited to read about the Hunter Anders, and yet I felt like there was something missing with this story.

Anders isn’t exactly looking for a life mate, but when he realizes he can’t read Valerie, he realizes he isn’t opposed to the idea of having one either. The only problem is that Anders meets Valerie after rescuing her from an immortal who was using her as his own personal blood bank. Worried about how she may react, he takes her back to the Enforcer house under the guise of healing, and makes it his mission to woo her before telling her the truth.

Valerie lived in a nightmare, and can’t believe how crazy her experience was. When Anders rescues her, she feels an instant attraction to the man, despite the horror of what she so recently experienced. She worries that he is keeping something from her, but isn’t sure what exactly his secret is. The only thing she does know, is that she won’t ever be safe until the one who kept her locked up is caught.

I really wanted to like this book, mostly because I adored Anders and was excited for him to get his happily ever after. But for me, there was just something missing in this book. I’m not sure what it was, but the book didn’t have the same magic that the first few books in the series had. Maybe I’m just starting to get burnt out on the series overall, but it just didn’t have the same spark that I associate with the first six or seven books.

I actually enjoyed Valerie. She was a heroine that I can usually get behind. She came out fighting in the first chapter, taking on her captor and doing everything she could to free herself and the women with her. And throughout the book she kept up that strength, through her acceptance of Anders and his extended family to the way she was willing to step back and not do anything stupid. I did think she was a little too accepting, especially after everything she went through.

It was great to see some of my other series favorites though, especially Marguerite. One thing I do really enjoy about Sands and this series is that the secondary characters are always ones I easily fall in love with. It’s great to see all the series favorites, both the mated couples and unmated ones. I can’t wait to see Bricker get his life mate!

I did like the mystery of this story. Sands does a great job with the hunters and having a big case for them to solve, while getting their life mates. This book didn’t seem to be as action intensive as some of the previous books, and that could have been another reason why it seemed to drag a little for me.

All in all while I enjoyed getting the chance to see Anders get his ever after with a great heroine, I am starting to get a little tired of the repetition with the series. With the last few books, I’ve seen more similarities than differences, and that has put a damper on my reading experience. I hope that if Sands continues with the series, she finds some of the spark that has been lost in recent installments.
I give Immortal Ever After a C+
Tweet