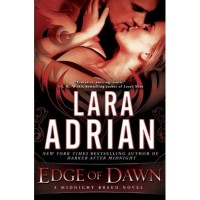 I’ve long been a fan of Adrian and the Midnight Breed series. When the original story arc came to an end, I was a little disappointed, but also super excited to see what direction the series would go in. I’m happy to say that this is one series that has NOT gone stale!

Mira is trying to live each day without Kellan, but it’s harder than she expected. She’s taking risks at work, and misses everything about the love of her life. When she lays eyes on him after years of thinking he was dead, she can’t believe it. But now Mira and Kellan find themselves right in the middle of a new warzone, one in which they find themselves on opposite sides.

Kellan never intentionally wanted to leave the Order, but years after his supposed death, he finds himself the leader of a rag-tag group of rebel fighters. As he and Mira team up together to fight this new war, he will have to deal not only with him passion for the woman he left behind, but also against the future that he can’t seem to avoid.

Many times when series stretch on, they tend to go stagnant. When the series came to an end with Dragos, I was a little concerned that this series would fumble around before it could find purpose. I was so excited to see that Adrian took this book to really set up what will be the next plot arc in the ongoing series. There were so many different little things brought up, and the new villain is one that will prove to be even more dubious than Dragos!

The romance between Mira and Kellan was great. There was so much heartbreak in the beginning, while Mira was under the belief that Kellan was dead. You could really feel just how alone and despondent she felt. I was a little disappointed with how long the reunion took, as it seemed like a large chunk of the beginning was with the two still separated. But once they were reunited, I loved how quickly the passion sparked back up with them.

I adored both Mira and Kellan as children in the earlier books in the series, now that we get to see them as adults, I loved them just as much. Mira is still that sweet girl she was, but now she is also a hardened fighter. She is strong and confident and the same wonderful girl that we all fell in love with. Likewise, Kellan is still reeling a bit over the loss of his family, despite the time he’s had to grieve. And now, with the loss of the Order and Mira as well, he has even more of a reason to pull away. I liked that Mira was still the only person to really pull him out of himself and into the land of the living. Their relationship and friendship was evident in every moment together.

All in all I am so happy to see the Midnight Breed series is still going strong, in a new direction. I think that Adrian has set up a really interesting and exciting plot arc that will hold strong for so many more books to come. It was wonderful to see all my Breed favorites, as well as meet the next generation of warriors. I can’t wait for more!
I give Edge of Dawn a B+
Tweet