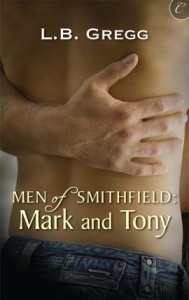 I had heard so many great things about Gregg, but wasn’t able to find the original story due to some publisher issues. When I saw the re-issue through Carina Press, I squeed and immediately requested a copy!

Mark never expected when he came home early that he would walk in on his boyfriend with another (straight) man. Although he kicks Jamie to the curb (and breaks his nose) Mark is stunned to learn that Jamie not only cheated, but also drained his bank accounts. Unsure of what to do, Mark turns to an old friend and town Trooper Tony for help.

Tony has long been waiting for Mark to grow up and get out of a relationship. Now that Mark is un-attached, Tony can make his move. But Mark’s situation with Jamie is worse than Tony anticipated and things go from complicated to seriously screwed up and Tony finds Mark constantly putting himself into hairy situations. Tony will have to figure out a way to keep Mark safe, while working to make it clear that he wants more than the friendship they’ve always had.

I really enjoyed this Gregg story and am looking forward to reading more set in the town of Smithfield. Tony and Mark are both great, and while I’m not usually a fan of books told in the 1st person like this, it worked out okay for me.

We really get to see and know so much more about Mark than Tony, since it’s told from Mark’s POV. However, Gregg does a wonderful job of showing Tony’s reactions, and giving us hints from other secondary characters as to Tony’s true feelings for Mark – both now and in the past. While it doesn’t give the same feel as a third person book, it was enough to whet my appetite and give me a good enough overall feeling of Tony that I felt like I knew him and enjoyed him almost as much as Mark.

I have to say this book has probably one of the best scenes I’ve ever read. I don’t think I’ve ever laughed so hard as when Mark goes to confront Jamie in church, and bitch slaps him upside the head with a Bible. *dies* It was pretty hilarious and a scene that I’m sure will stick with me for years to come! The conflict with Jamie played out nicely though, and I was glad to see that Mark didn’t back down, and although he acted immature and somewhat childish in the beginning, he also kept his head about him and did what needed to be done to get his money back.

I hope that in future book we will get to see Tony and Mark together more. I love couples that go from a long time friendship into a romantic relationship, especially when they have both secretly pined for one another. Seeing Mark struggle with coming to terms with Tony’s feelings, and Tony having to almost smack Mark with his attraction, these two were fun to watch as they made the transition from friends to lovers.

All in all I am so glad I followed the advice of my m/m-lover friends and got the first in the Smithfield series. Tony and Mark are so cute together, at times innocent and naive and other times smoking hot. I loved their relationship and hope that we can see more of them in future books. M/m fans who have NOT read the Smithfield books when they were first released will definitely want to pick up a copy now!
I give Men of Smithfield: Mary & Tony a B+
Tweet