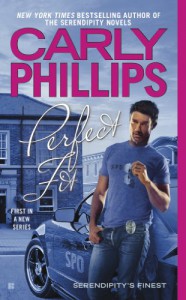 I’ve been a long time fan of Carly Phillips, and with her newest series set in small town New York, she has catapulted herself into one of my all-time favorite contemporary romance authors.

Mike never wanted to stay in Serendipity forever, but when his adoptive father gets sick, Mike returns home temporarily to take over the position of Police Chief. The last thing he expected was to fall back into insane lust with one of his cops, Cara. The sexual tension from their one-night stand is off-the charts, and although Mike is hesitant to rekindle their relationship, he also can’t deny how strong the pull is between them. When Cara comes to him with details of a cold case that points negatively towards his biological father, the two are thrown together on the clock, and off.

Cara doesn’t bother trying to deny her attraction and growing feelings for Mike, but the fact that he doesn’t want to settle in Serendipity is a constant reminder of how things could never work between them. But as they continue to work together, they grow closer as both friends and lovers, and before long Cara finds herself head over heels. As more and more details on their case come to light, Cara holds out hope that Mike will find something in Serendipity, besides her, that will make him stick around this time and give them a real shot at love.

I’ve long been a fan of the Serendipity series, and I was so excited when Phillips announced the next trilogy would feature some of the men in blue. I really liked Mike. Despite his insecurities about his family and where he fit within them, he was a pretty amazing hero. He had his own issues and problems and worries, and yet he was also a genuinely good guy. He cared for his mother, his adoptive father, and his half brother and sister. He wanted nothing more than to fit in somewhere, despite his inability to stay in one place long enough. I liked that he had real issues that made perfect sense within the story.

I also really enjoyed Cara. She was one of those heroines that wore her heart on her sleeve, and had a place in her heart for everyone she meets. She was so sweet and loving and giving and I absolutely adored that about her. I was so glad that she was willing to fight for Mike, that she was patient in giving him space to figure out his place, and yet she also was able to have his back and support him while he made his decisions. I loved the relationship she had with Mike’s younger brother, also her partner on the force. They already had a brother/sister kind of bond, and the fact that he went to bat against Mike FOR Cara was so sweet to see.

I thought the romance was wonderful as well. The sexual tension between them was so steamy, and the fact that they were both hesitant and quick to act on it made it all the more enjoyable. I loved seeing how well they worked together, and how well they complimented each other on the job and off. Poor Mike was a little slow on the up-take when it came to figuring out exactly what Cara meant to him, but when he got it, he did it right.

The mini sub-plot with Mike and Cara and the cold case was also done really well. It helped move the story along quicker, and was a huge factor in helping Mike really find his place, not only in Serendipity, but within his family as well. I enjoyed watching it all unfold, and was even a little surprised by some of the twists and turns.

All in all Phillips has come up with another great story for the small town of Serendipity. I adored Mike and Cara, and Mike’s quirky family. This book had everything I’ve come to love and expect from Phillips: a smoking hot hero, a heroine I can relate to, a wonderful romance, and a few steamy moments to heat up the pages! I’m so excited for the next book in the series, set to feature Mike’s younger sister Erin and town bad-boy Cole!
I give A Perfect Fit a B+
Tweet