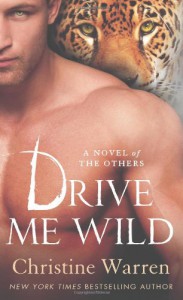 I just recently discovered Warren and The Others series, and although this is only the second book of hers I’ve read, I really enjoy her writing.

Tess is a witch, and not exactly on the best of terms with her family. So when she gets handed down a special mission to reach out to the Council of Others leader Rafael, she is more than a little surprised. But the good little witch that she is goes out to do as she is told. Although Tess knew she would have a hard time getting Rafael to hear her out, she never expected the sexual chemistry between them to rock her to the core.

Rafael never thought he’d be a one-woman kind of man, but meeting Tess has him running in circles. Not only is he stuck trying to figure out what exactly the witches want to meet with him about, after 400 years of silence, but he also is dancing around Tess, trying to figure HER out. As the witches true plan begins to unravel, Rafael and Tess will both be tested in ways they never thought possible, and their future together becomes iffy at best.

I’m definitely intrigued by this series, and love the fact that the books each seem like a stand-alone. Like I said, I’ve only read two in the series, and yet I never really felt like I was missing anything with the overall story arc. Then again, I could just be totally oblivious to what is going on overall. I liked the uneasy feelings between the witches and the shifters, especially once it played into Rafael and Tess’ relationship.

I did like the relationship and romance between Rafael and Tess. It was fun to watch them dance around each other, flirt and try to work out the sexual tension, all the while wondering just where the other person really stood. I loved the fact that although Rafael wasn’t really sure that he would ever be able to settle down and mate, but when he found Tess, he knew just what he was getting himself into, and what he wanted from her. It was sweet to watch them work out all that sexual tension (RAWR), while realizing just how perfect they were together.

I liked the whole kerfuffle surrounding Tess and her grandfather. I felt so bad for the poor girl, because the man was obviously a piece of work. Yet the underlying power plays and backstabbing just made the book that much more interesting. I have to admit though, if I was Tess, I would have backhanded the old bastard a long time ago and never looked back!! The fact that she was willing to put up with so much bull from him had me questioning her judgement at times.

One of the aspects that I thought was somewhat weak in the story was the romantic curse against the jaguar shifters. Although it was touched on quite a few times, it never really worked for me. I don’t know why, it wasn’t like it was a frivolous plot point, however everyone blaming Tess seemed ridiculous and petty.

All in all I really enjoyed this book. I will definitely be looking into reading more from Warren and catching up with the series so that I can have a better understanding of the world as a whole. I really liked all the sexy times between Rafael and Tess, and enjoyed the twists and turns between the shifters and witches. I hope that Warren expands on that more in future books.
I give Drive Me Wild a B-
Tweet