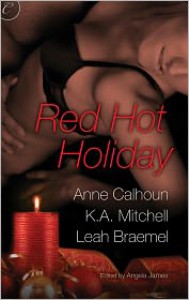 I love KA Mitchell. I have a huge girl crush on her, and her stories are always so fun and sexy and fabulous. While Joey and Aaron still have my undying devotion, and are probably my favorite m/m heroes of all time, Evan and Jonah have a great little story to tell as well.

I can admit that one of the things that drives me bonkers in romance books is big misunderstandings. I hate when couples don’t talk things through and just work out whatever it is that is eating at them. Especially when huge drama can be avoided by one little conversation. However, in this case, I can see why Jonah was scared to say something. I just wish that maybe he and Evan would have talked sooner than they actually did…

I was a little surprised by the lack of sexy times in this book. It could be because of the novella length, however I was expecting more from Mitchell. It seemed like the majority of this book was spent on the angst of what if. What if Evan and Jonah broke up, what if Jonah shared his list of sexual explorations he wanted to try, what if Evan revealed some of his sexual dominant past, what if Evan proposed and Jonah never got to complete his list. What if, what if, what if. The sexual tension was at an all time high for Mitchell, but it worked within the story. With the uncertainty on both Evan and Jonah’s parts, they danced a bit around each other, not really sure how to move forward with their somewhat bland sex life, or how to spice it up.

I have to admit, I was a little bummed with the way that Jonah handled everything. Again, I can see why he was hesitant to come outright and talk to Evan, but he also went a little too far for me. Without giving too much away, Jonah looks for answers to all his kinky questions, and I thought he went about it in a way that felt kinda sleazy. For me, he came dangerously close to crossing a line that would have made his character unredeemable in my eyes.

BUT, I was happy with the way it all tied together and ended. The last scene in the book, where they finally connect both physically and emotionally was so intense and so sexy and just so everything. It really tied together the story and solidified the relationship between Jonah and Evan. It put them on not-so-equal footing, but in a place that was perfect for where they both wanted and needed to be.

All in all I really liked this novella. Mitchell kept me on my toes, and kept me guessing as to whether or not I would be able to stick it out with Jonah. However, I should know by now that she would never let me down, and I’m happy to say I loved the end! As always, reading anything by Mitchell has me panting for more!
I give Wish List a B

I Need You for Christmas by Leah Braemel

The one thing every story in this anthology had was some kind of secret or misunderstanding between the main characters. In this, both Megan and Ryan are ready to move their relationship from long distance to living together. They’ve both decided to surprise the other with a big change, so the fact that they danced around the subject through the story drove me a little bonkers. I thought it was super cute, but at the same time wasn’t impressed with the way it came across as forced drama.

I have to admit, I loved the sexy times in this book. The BDSM aspects were well done, and I never felt like it was forced or that the characters were unsure. The scenes were hot, hot, hot and Megan and Ryan were so perfect for eachother. They had this wonderful opposites attraction, and I really liked the way it added to their relationship. When it came to outside the bedroom, Megan really seemed to take on the more dominant role, whereas in the bedroom she was a submissive through and through. It was a great change of pace from the standard female submissive characters I’m used to reading.