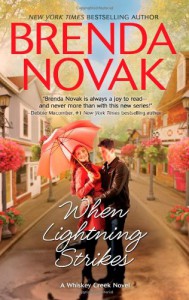 MinnChica: I’ve long been a huge fan of Novak’s romantic suspense series, so when I heard she was starting up a new contemporary romance series set in a small town, I was sold. I love small town romances, and with Novak’s writing style I knew I would be in for a treat. While I was very disappointed in the intro novella to the series, I had hopes that this book would be completely different, and one that would restore my faith in the series. I’m happy to report back to you that it did in fact far-surpass the novella and made me anxious to read more and more in the series.

Has: I have a confession to make – this is my first ever Brenda Novak book I’ve read (I know, I know) – overall I did enjoy my first taste and I really liked the tone and small-town vibe with an engaging romance. However I did find some issues with, Simon’s past and relationships with his ex-wife and father and how that affected him over the course of the book. But I love the marriage of convenience trope and Gail was a fantastic foil to Simon who is belligerent and on a self-destructive road due to his break-up with his ex-wife and is in the middle of a bitter custody battle. I loved how both Gail and Simon who were both Hollywood professional/star stripped down to their real selves when they settled into Whiskey Creek, and that for me is where the romance really developed and began to shine for me.

MinnChica: The whole marriage of convenience is one of those things that makes me smile inside. I don’t know why, but I love it to pieces. And I loved the way Gail and Simon handled it and the slow build up their relationship took. I’ll agree that the plot with Simon’s ex wife was annoying at times, and made me want to find Simon a better lawyer, but I liked the way his father played into the overall plot and how he went from this total D-bag to a somewhat supportive and proud father figure. I’ll admit that I thought Gail and Simon were pretty perfect for eachother. Gail was there to nudge and lead Simon toward better decision making, and Simon really gave Gail a chance to branch out and be wild and fun and exciting. I enjoyed their romance, and hope we get to see more of them in future books!

Has: I loved that aspect with Gail becoming more relaxed and less uptight as well as just letting go emotionally as well as sexually with Simon. Whilst she brought him stability and a touchstone that was reliable and honest. I really did believe that their relationship would last despite the fact I found his character initially unlikeable due to him being a womaniser and a cheater as well as a drunk. Although I wished there was more to expand on how strongly he felt for his ex before he succumbed to his self-destructive path because I didn’t really believe this was a good reason, even if though his wife betrayed him horribly at first with someone he was close to. This was the weakest aspect of the book for me, but the growing affection and attraction which turned to love with Gail reformed his character.

Their relationship was really heartfelt and warm and the backdrop of the small town really helped with the overall tone of the romance even though he was a huge star and she was a high profile PR executive. The supporting cast of characters also added to the atmosphere of the book, and lays down future story threads for the sequels which I will definitely be interested in picking up!

MinnChica: I agree that Simon was a little difficult to like at first, especially with the way he treated Gail, stole all her clients, and then made her bend over backward for him. He definitely came across self-centered and a huge jerk. But once he got to Whiskey Creek and spent more time with Gail and her friends, I loved the way he seemed to really look into himself and find the error of his ways and do the smallest yet sweetest things for Gail to prove that he was changing. I loved the dedication he showed toward her, and although he still had a few issues with how to handle his ex-wife, I fell in love with him right along side Gail. Although the ex-wife situation was a bit of a cluster-F, I was glad to see how he and Gail resolved the whole thing, and were able to stand up against the bull and hollywood spotlights to prevail as a couple.

Has: I totally agree! I think the strong-point to this book was how much he changed from that jerk we first met in the beginning of the book, and both of them realising their initial feelings and impression with each other was wrong. There was also a sense he took his time to get over his past and I liked that because it was realistic and there was no magic wand for him to get over his issues.

When Lightning Strikes is a sweet, heart-warming romance about redemption and taking a second chance on love, which I loved! The setting of the small town of Whiskey Creek, was filled with a great cast of supporting characters – but the romance for me was the real star of the book!

I give When Lightning Strikes a B-

MinnChica: All in all I was so happy with the first full length book in the Whiskey Creek series. I was a little worried after the novella, but Gail and Simon really came through with a stellar romance and a great introduction to the town and the group of people in it. I loved the marriage of convenience, and the way that Gail and Simon started out as enemies, and really came to depend and rely on each other. They built their romance on trust and friendship and it progressed slowly over the book. The romance, for me, was incredible well done. While there were a few plot points I wish would have been handled differently, namely the ex-wife and Simon’s agent, I felt the story was strong overall and the romance more than made up for everything else.
I give When Lightning Strikes a B+
Tweet