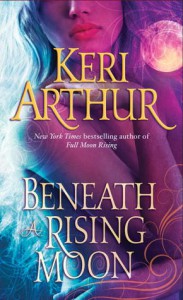 I am a huge fan of Arthur, and have been since I picked up my first Riley Jensen book a few years back. When I saw this reissued book come up on NetGalley, I knew that Arthur would be able to satisfy my love of all things smutty werewolves, and she didn’t disappoint.

Neva’s twin sister is in the hospital after an attack by a serial killer wolf. Neva decides to pick up her sister’s investigation, but in order to get access to the places she needs to go, she will need to seduce the only Sinclair who was cleared of the murders: the wild-child Duncan. Duncan isn’t what Neva expected, but she also knows that in order to track down her sister’s attacker, she will have to put up with Duncan and all his underhanded ways.

Duncan is sure that Neva is a spy sent from the killer to seduce him for information. The last thing he is going to allow is someone to play him. But the more time the two of them spend together, Duncan’s feelings begin to deepen and Neva’s motivations become less important to him. But as they get closer to finding the killer, Neva finds herself in the killer’s sights, at the same time Duncan realizes his depth of feeling for her. With the killer on the loose, will Neva and Duncan be able to survive long enough to look at their future?

I was a little worried in the beginning of this book that Duncan would be too much of an ass to Neva, and then not be able to redeem himself. I’m happy to report that was not the case, although he definitely toed the line for awhile there! Poor Duncan was so convinced that Neva was sent by the killer to spy on them, that he really went out of his way to break her down and get her to talk. I will be adding Duncan to my list of alpha hole heroes who walk the line between asshat and alpha with the best balance.

I really felt for Neva, being caught up in a case where she really had no experience being in. On both the sexual front and the investigative front. Not only is Duncan the wild child that has done it all, Neva is somewhat inexperienced, and given her family’s very traditional values, she is practically shunned when they find out what she is doing to try and save her sister. It had a very old-school feel to it, but I liked that Neva and her sister were willing to fight tooth and nail to go to whatever lengths need be to solve the case and catch the killer.

The serial killer case was done in true Arthur fashion. It was gritty and gruesome and involved and the killer was someone that I wasn’t expecting in the very beginning. However, I was able to guess who the bad guy was fairly quickly around the halfway point. One of the things I love about Arthur is that she doesn’t hold back on the nitty gritty. The killings were horrific and not much was glossed over.

The romance between Neva and Duncan was great as well. Unlike the Riley Jensen books, Neva and Duncan resolved their relationship issues within this book, and while things moved very quickly at the end, I LOVED the way it ended. With how Duncan treated Neva for awhile there, and Neva’s own issues with her parents, I can’t imagine it ending any other way. It was sweet and sexy and romantic and although sometimes the whole destined mate trope doesn’t work for me, I think Arthur does an incredible job with this one.

All in all I am hooked on yet another Arthur series and can’t wait to find out more about this pack and world. I loved both Neva and Duncan as individuals as well as a couple. They were so sexy and their relationship really ended on such a positive note, I was jonesing for more! I am super anxious to find out what happens with Neva’s sister Savannah in the next book!
I give Beneath a Rising Moon a B
Tweet