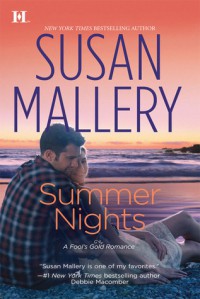 I have such a soft spot for small town romances, and the Fool’s Gold Series by Susan Mallery has always been some of the best. In this book, we get to see the not-so-stereotypical librarian Annabelle meet her match with the horse trainer Shane.

Shane is back in Fool’s Gold to breed his new racehorses close to his family. What he never expected was to be put in charge of his mother’s menagerie of older animals while trying to breed new horses, building a home and find the kind of woman he can settle down with. He wants the nice quiet librarian type, but despite Annabelle’s job, she doesn’t seem to fit the bill. When Shane agrees to teach her to ride for the festival, he will have to fight the attraction that he wants nothing more than to deny.

Annabelle only wants to find someone who will love her unconditionally. She is sick of changing herself for others, and wants the kind of happily ever after that she sees all of her friends getting. Annabelle is attracted to Shane, but after he compares her to his ex-wife, she has to shield her heart from falling too deeply. But Shane’s kisses melt her resolve and Annabelle soon finds that she can’t help but he head-over-heels for the one man she shouldn’t be.

I really liked Shane after Summer Days, and I was excited to see how his pairing with Annabelle would work out. It was obvious that Shane still held some nasty grudges against his ex, and he didn’t seem ready to let go of that anger. I had strong hopes that Annabelle would be able to quickly snap him out of his funk, but Shane was a lot more attached to that hatred than I thought he would be. It took quite a bit on Annabelle’s part in order to pull Shane out of his funk and get him to the point where he was ready to love again. There were even a few parts where I was ready to give up on Shane and find another heartthrob for Annabelle.

I really liked Annabelle’s character. Although she is loyal to her friends, and not the typical librarian, she is still shy and reserved. She gave up a lot of herself in her previous marriage and is ready to do whatever it takes to stand on her own two feet and be her own woman. She doesn’t want to live under anyone’s thumb, and although she doesn’t think so – Annabelle is an extremely strong woman.

I will admit that I was a little disappointed in the relationship between Annabelle and Shane. Like I said, Shane had a hard time letting go of the pain and anger in his past, and he took a lot of that anger out on Annabelle. He was difficult to deal with at times, and while he treated her with respect, he always kept a part of himself walled off from her. I didn’t like their romantic journey as much as the other Fool’s Gold couples, and hope that Shane has to work VERY hard at keeping Annabelle happy in future books.

I am very excited to see where things go next for Charlie, the last in the trio of girlfriends to get paired off. We find out quite a bit about Charlie’s past, and I am so excited to see how she grows as a woman and character, especially since she’ll be matched with the youngest Stryker brother – underwear model Clay.

All in all this wasn’t my favorite Fool’s Gold Series, and the one that had the weakest romance, in my opinion. I was glad to see Annabelle finally get her HEA, and getting the backstory from the Charlie was a huge plus. I’m anxious to read the next story and hopefully get back to the love stories that Mallery is known for.
I give Summer Nights a C+
Tweet