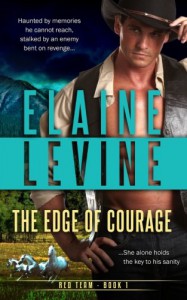 I was so excited to start this book, it has a wounded war hero (which I love), cowboys (which I love) and tackled an issue that I don’t think gets enough attention. I was a little worried that the issue of PTSD would be glossed over, or not dealt with adequately, but Levine did an AMAZING job with that aspect of the story.

Rocco is just home from war, and suffering from a case of PTSD that is interfering with his everyday life. He can’t sleep, can’t eat, and can barely function. His one and only thought is about that horrific day, trying not to relive it and yet trying to remember. At the request of his buddy, Rocco heads over to Mandy’s ranch to help out in her times of trouble.

Mandy’s only goal is to open her therapeutic riding center on time. The few problems and setbacks worries her brother, so when Rocco shows up to help, she puts him to work. But there is something about Rocco that Mandy wants to help with. She wants to help him deal with his days as a warrior and come back to the land of the living. But when the threat develops into more than she ever expected, Rocco might be the best person to help keep her not only on track with her goal, but also alive.

I can’t even begin to say enough good things about this book. I’m not the kind of girl who emails new-to-me-authors after finishing a book, but I have to say when I finished this one, I did exactly that. There were just so many incredible moments in this story, and I am so anxious for the rest of the books in this series.

Starting with the romance: I adored Mandy and Rocco together. Poor Rocco is so broken from his time in the military, and he comes home absolutely beaten down. He doesn’t seem ready for a relationship, and yet Mandy befriends him, takes care of him, doesn’t let him push her away and is the best partner Rocco could ask for. While she goes above and beyond to care for him, he does what little things he can to care for her. He looks over her project, he protects her, and when things really hit the fan, he does anything and everything in his power to keep her safe. They definitely had a slow building romance, but the journey from friends to lovers was just so amazing to watch.

The suspense in this book was incredibly well done as well. It reminded me a little of the Suspense Series by Kaylea Cross, which are some of my all-time favorite military suspense romance books. I was constantly kept on my toes, wondering where the next strike would come in, who was behind it all, how certain people would get in and out of the sticky situations. Without giving anything big away, there was a lot of action and nail biting moments for not only Mandy and Rocco, but the cast of secondary characters as well.

Speaking of secondary characters, Levine is absolutely INCREDIBLE at creating a cast of characters that jump off the page and pull you into their own lives. I wanted to know each and every character better, wanted each of them to get their own stories. I haven’t been this invested in a team of ex-military men since the BOI books by Cindy Gerard.

As I said earlier, I was a little worried that the big issue of PTSD would be glossed over, or barely touched on. Instead, I thought that Levine did an absolutely wonderful job of showcasing just how horrific it can be to suffer from PTSD. Rocco struggled with it day in and day out. He got better, and relapsed. He had to work hard, every single day, to overcome the horrors he saw. Even at the end when all was seemingly well, I never once doubted that he would still struggle with the nightmares and flashbacks. I can’t say enough wonderful things about the way that Levine wrote Rocco’s character, and was so glad that she did such an amazing job bringing to light a topic that I don’t think gets nearly enough coverage.

All in all I really can’t gush enough about this book. There was never a moment when I wasn’t one hundred percent dedicated to the story and characters, and I cannot wait for the next book in the series to be released. I’m absolutely in love with Rocco, Mandy, Rocco’s teammates, the townsfolk, and the few other secondary character we’ve met so far. I have a feeling that this series will be topping my list of favorites in the romantic suspense category.
I give The Edge of Courage an A+
Tweet