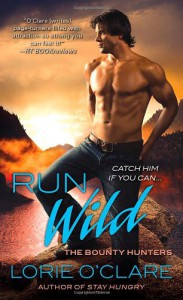 I had only read O’Clare once before, and after seeing the cover and reading the blurb, I knew I would have to pick up this book as well. What’s not to love about small towns, a sexy Sheriff, and a daughter who will go to any lengths to protect the father that was never around?

While I hadn’t read any of the Bounty Hunter books before this one, I was able to easily slide into the world and navigate my way through without any kind of troubles. This book easily reads as a stand-alone, and a fun one at that.

Natasha is called by the Sheriff to come up north and answer some questions about the father she hasn’t seen in years. Although she doesn’t think she’ll be able to give him any information, she goes anyway, because family is important. Once she realizes that her father is on the hook for murder, she wants to stick around and do everything she can to prove his innocence while Trent hunts him down.

Trent likes being the Sheriff of a small town, but with such a gruesome murder on his hands, he needs to find Natasha’s father and wrap this up quick. The only problem is he is attracted to Natasha more than he ever expected, and the more they uncover together, the more he starts to believe everything may not be as it seems.

I’ve always enjoyed a little murder mystery with my romantic suspense, and although this wasn’t very suspenseful, the mystery behind the murder made up for it. I was amazed at how O’Clare was able to string us along, thinking Natasha’s father was the killer (with some pretty damning evidence I might add), and then throw in a curveball at the end. That aspect of it was done so well and made for a really enjoyable read!

I don’t know if this is common for everyone, but in my romantic suspense books, I tend to always like the hero a little bit more than the heroine. And Trent was no exception. His small town vibe was so cute, and yet he was able to handle himself when big-city problems arose. He was an alpha through and through, and at times even a little archaic with his thinking. I always love a good alpha hero who realizes that what he really wants isn’t a sweet little housewife and falls head over heels for the opposite of his “dream girl.”

Although the romance between Natasha and Trent seemed to take one step forward and one step back, I liked it. Usually that kind of romance really bothers me, but for these two it really worked. Between the murder case and not really knowing if Natasha’s father was involved or not, Trent’s dealing with a strong willed woman, and their amazing sexual tension, the back and forth really worked for me.

All in all I enjoyed this book by O’Clare and will definitely be looking into her back-list. Although the suspense wasn’t as high as I would have liked, the murder mystery itself added so much to the book. I adored Trent, and Natasha really grew on me the more she came out of her shell. Plus their relationship was too perfect for them as a couple.
I give Run Wild a B
Tweet