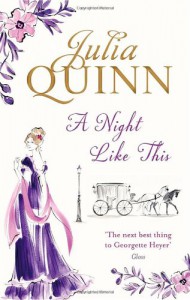 E: Daniel was a pleasant change from the Regency “Rake”. He has spent the last several years of his life paying for an accident and staying away from his home, his family, in fact away from most civilized areas always looking over his shoulder. As a result he never had a chance to develop into a rake. I have to admit that I liked the change. While a beta male, I really enjoyed that he just as determined to gain his goal only using different techniques. His scheming to encounter and spend time with Anne was very sweet to see. He also stepped up to the the hero when the chips were down and Anne needed his support.

Lou: I’m a big fan of the beta males. They bring a completely different dynamic to books, and it does make for a great change compared to the mighty Duke. Daniel was such a tease with Anne, and despite her not wanting to have anything to do with him, he never gives up in his pursuit of her. I did at times think that Daniel was a little selfish in his dogged pursuit because he was in such a higher class of position, I felt that Anne at times was pushed by Daniel and the power balance was unequal.

MinnChica: I adored Daniel. He was so laid back and easy going. He hasn’t lived the best life, and I think that adds to his overall charm. He wasn’t jaded, but he was conscious of what is truly important in life, and despite the time he spent away from his family, he loves them and cares deeply for them. I have to agree with both E and Lou, this story was definitely a change from the typical Regency romance novels. But personally, I thought it was great, and Daniel was a big part of that.

E: Anne also was living a life not of her choosing due to some events in her past. However, she is certainly making the best of her situation and has found a rather enjoyable job. Or at least her charges keep life from being boring. She managed to maintain contact with her sisters which I thought was wonderful. She also didn’t let her circumstances keep her from enjoying life while maintaining the reputation required for her positions. She was really strong mentally and willing to do whatever she had to protect those she cared about. Anne didn’t let the betrayal of those who should have protected her sour her viewpoint on life. I loved her interactions with Daniel and her Smythe-Smith charges. They were never boring or cruel which I thought was just wonderful.

Lou: Anne is a heroine that survives no matter what has been thrown at her, and the way she made herself a life shows her resilience. Anne’s first introduction to Daniel was classic Julia Quinn, and the banter was fun and romantic. Like E, I loved her relationship with the youngsters. Julia Quinn always makes family a strong vocal point in her book, and little Frances was a doll.

MinnChica: Anne, that poor thing. She really did the best with what life handed her. Poor girl was cast out from her family after making a silly mistake, she was forced to work for a living, and yet she preserved. She made lemonade with the lemons in her life, and she did it with a smile on her face. Had I been in her shoes, I would have been a hot mess. Her relationship with the young girls was so great, and I loved that she really acted as more of an older sister than a governess to the girls. Anne certainly had a heart of gold!

E: Oh I had several scenes that found me laughing out loud as I was reading them. I think I am going to go with the discussion around the breakfast table that ranged from kippers, mints, math, the Isle of Man, Shakespeare, Smythe-Smith original plays and unicorns. The cross topic conversation with Daniel trying to keep up while also verbally backing Anne into a corner with the unknowing assistance of the three girls was priceless. It reminded me of conversations my sister and I have when my brother is around and he would be left wondering where the conversation went.

Lou: To be honest, I didn’t really have a favorite scene with the book. I did enjoy the humour of the interactions between Anne, Daniel and the little ones. Especially the play and the unicorn.

MinnChica: I’m having a hard time picking my favorite scene. There were some really great moments, the breakfast conversation that E mentioned was hilarious. I loved when they were all re-enacting Harriet’s play. It just went to show how much value Quinn places on families, and that is a big part of why I love her books and writing so much.

Lou: Whilst I liked Anne and Daniel, I felt that the story itself seemed quite generic. Whilst the romance was sweet, it also felt predictable and not new and fresh. The villain of the piece also felt like a cartoon character and not particularly scary. I know that a lot of Julia Quinn novels are light hearted, but this one seemed overly so.

MinnChica: I have to agree with both E and Lou on this one. I too wanted Anne to get more. I wanted to see some page time with her sister, I wanted to see how her parents would deal with her marrying into a higher station. I wanted to see the villain go through heck of a lot more than he did, especially after going so bat-sh*t crazy. And while this was a very simple and unique Quinn story, it also seemed as if it just skimmed the surface of what it could have really done.

E: This was vintage Ms Quinn, humor, meet cutes, strong, spirited but not annoying heroine. This is a feel good book and despite my complaints above, which were really slight niggles, an enjoyable read. I hope that Daniel’s best friend gets his HEA because he has suffered just as much as Daniel and Anne. I know I can always count on Ms Quinn to give me an entertaining read. I give A Night Like This a B.

Lou: This was a nice pleasant read with a sweet romance, but it’s one of my least favourite novels by Quinn. I wanted more depth and impact from the romance, and the overall story seemed quite generic. The charm seemed to be missing from the romance. All in all, I give A Night Like This a C.

MinnChica: All in all Julia Quinn remains my all time favorite Regency romance author. I love her voice, the importance she places on families, and her ability to write engaging characters that pull me into the story and keep me turning the pages. I hope to see more of Daniel’s friends, especially Hugh. I can’t wait for the next Smythe-Smith book. I adore the premise and the girls are all so charming in their own silly way.
I give A Night Like This a B
Tweet