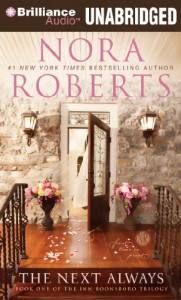 Publisher: Berkley
Publish Date: Nov 1st
How we got this book: From the Publisher

Lou – The Unrequited love/feelings trope I’m a big fan of, and when Nicole sent me this I was nearly jumping for joy as La Nora is one of my all time favourite romance authors. Whilst I liked The Next Always, in many ways it fell flat for me. Unfortunately, it was due to the hero whom I didn’t think had much charisma with Claire — other than he always had a crush on her since high school. When Beckett was interacting with his own brothers, and Clarie’s young kids, his personality was shown so much and he was adorable. But the romance itself fell flat for me, and I wasn’t really invested in them as a couple which is a first for me in a Nora Roberts book.

MinnChica – It’s no secret that I am a HUGE fan of heroes who are head over heels for the leading lady. When I found out that Beckett has had a thing for Clare since HS, I knew he would be one of those heroes I could fall for! Plus, every time he interacted with Clare’s kids… I was a total gonner. One of the other things I absolutely adored about Beckett was his relationship with his brothers. The three of them were so fun together, their relationship seemed real, with all the good and the bad. I actually really liked Clare. Not as much as Beckett, but I liked her. I thought she was a solid heroine: totally devoted to her kids, still mourning the loss of her husband, trying to get on with her life, and ready for the next stage. Roberts was able to show her growth, from being willing to try a relationship, to accepting how she really felt towards her husband’s death. Plus, with a best friend like Avery, who was one of my favorite characters in this book!

Lou — For me, I liked Claire more than Beckett. She had more personality for me, and I felt the emotional connection between her and the kids was much stronger than her connection with Beckett as their relationship went on. She loved her deceased husband so much, and I’m happy that Nora never diminished the love Claire had for Clint. I also really liked how she started dating Beckett without feeling guilty. Whilst she was hesitant, she wasn’t afraid and I really admired Claire. I just wished that there had been more on-screen time with Beckett and Claire, and there was too much other stuff going on that really didn’t interest me — like the making of the inn, the time spent going through what they were planning/building and so on. Avery was a favourite of mine also, and I can’t wait for her story as I think she has so much character that she’ll make her hero work .

MinnChica – I agree, I wasn’t a huge fan of all the scenes with the building of the inn, and although the process is interesting, I could have done with more page time between Beckett and Claire. I have to say though, the scene where Beckett was with his brothers and talking about making little caskets for Clare’s sons’ action figures. To me it just showed how willing he was to be with Claire, how much he truly got her kids. It also showed how much a kid at heart he still was. Plus, the fact that his brothers totally got it too, I loved that.

Lou – Oh that coffin scene was so emotional, and it was a lovely scene that showed how much of a great Father Beckett would be them. In fact, I think the strongest emotional scenes throughout the book featured the children with either or both Claire and Beckett. I think one of my favourite scenes is when Beckett looks after the kids for the first Man Night. It was so adorable, and so funny — especially when he gets stuck in and takes a superhero plate for himself.

MinnChica – I’m giving away a little spoiler here, but there is a ghost that seems to be haunting the inn, and it was my least favorite aspect of the book. It felt forced and ridiculous and out of place. Call me crazy, but if there is going to be a ghost, I want a full-fledged paranormal. Go all out! Instead, this felt ridiculous and hokey, especially at the end. Since the whole ghost thing was so ingrained into the story, it did leave a little bit of a bad taste in my mouth regarding the whole book.

Lou – I really agree. Includes spoiler also. The whole ghost aspect I hated hated hated. It was so bizarre that I’m honestly surprised that Nora thought it was a good plot to put in the book :S. I hated it that much because it totally ruined the ending into a WTF just happened here when the ghost writes on the mirror informing everyone that Claire was in danger from her stalker, Sam. For me, it lowered the grade big time, and it felt so out of place.

MinnChica – All in all I have mixed feelings about this book. I loved Beckett and his brothers. I loved Clare and her girlfriends. I love the interactions between them all. I thought the romance between Beckett and Clare was sweet, believable and fun to read. I liked them together. The mini suspense plot with Clare having a stalker didn’t bother me either. I thought it fit into the story well enough from beginning to end. I just can’t get over the ghost thing. It bugged me. It still bugs me. I hope it wont play as big of a role in the following books, and if it does, I don’t think this will be my Roberts favorite.
I give The Next Always a C+

Lou – I really really liked Avery, and I can’t wait for her book. But I just HOPE beyond belief that we won’t have any more ghost plots, but since the inn is centered around it being haunted, I guess we’ll have more of it to my dismay. All I know is that after finishing The Next Always, I finished pretty much disappointed with it overall and it doesn’t feature that great of a romance. But there are flashes of Nora’s great emotional and character interaction. I give The Next Always a C-.
Tweet