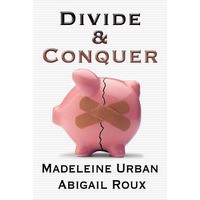 Publisher: Dreamspinner
Publish Date: Out Now
How I got this book: NetGalley

NOTE: This review has spoilers for the previous books in the series.

So I was looking for something a little different to read that I wouldn’t normally pick up, and after hearing Mandi from Smexybooks go on and on and on and on about this series, I realized that I had the first book in the series as a free download and decided to try it out. Oh. My. Gawd. Hooked. I was immediately drawn into Ty and Zane. I actually inhaled all four books in a week, as well as two other books from Urban and Roux’s backlist.

This is the fourth book in the Cut & Run series, and we left Ty and Zane after their insane cruise ship incident. Ty told Zane how he really feels, and we have yet to hear those three little words back from Zane. A case of serial bank robberies and bombings have them front and center in both their case and with the media. With their relationship still on rocky ground and their case blowing up left and right, these two will be pushed to their limits once again.

I love that Urban and Roux don’t pull their punches when they write. If there is even the slightest chance Ty or Zane could be hurt (emotionally or physically) these two get put through the ringer. I’m still waiting for a time when these two aren’t beaten down, landing up in the hospital or scarred emotionally. But for me, it’s part of the charm of these two. They literally go through hell and back for each other and their relationship. The bond between these two men is so strong it’s incredible.

One of the biggest draws to this series for me is the suspense and mystery action. And while the first three books were VERY well done in that aspect, I didn’t feel it was done as strongly in this book. It seemed as if the action and mystery of the case really took a backseat to the relationship aspect of this book, which isn’t a bad thing, but I would have liked a little more suspense along the way.

There were two things about this book that absolutely crushed me (in both good and bad ways). The first was the situation with Ty’s best friend Nick. I was not a big fan of the way that played out, and awhile I was glad to see Ty come out to his friends, what followed was also a little bit of a WTF moment for me. It felt forced and unnecessary and a little out of the blue. I can only hope and pray that nothing else comes of it in the future. Also, the ending absolutely killed me. I sat and stared at my nook for almost a full five minutes, in shock that it had ended there. I wanted more. Needed more! Thankfully there was a little teaser for the next book, so I had a little relief there.

All in all I am so so happy that I decided to branch out and try this series. From the first moment Ty and Zane stepped onto the page I was in love. They are both such strong Alpha heroes, but at the same time there is such a dept to their relationship that it sucks you in and keeps you turning the page as quickly as possible. I can’t wait for more Ty and Zane and to see where else this series will go!
I give Divide and Conquer an A-
Tweet