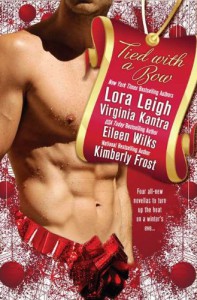 Publisher: Berkley
Publish Date: November 1st
How I got this book: Review copy from publisher


I love the world of the Lupi, so when I received this anthology, I was super excited to read Wilks story in particular. The stories in order in the anthology:

Upon a Midnight Clear by Virginia Kantra
I started to read this story and stopped after only about 20 pages. I’ve read some of Kantra’s stories in the past, and I’ve never been a fan of historical paranormal stories for some reason. I’ve tried with Kantra’s Children of the Sea series and was not impressed. So unfortunately, I didn’t get very far with this story either (although I don’t think it’s set in the Children of the Sea world.)

First Light by Kimberly Frost
This story is the first in a new series by Frost about a rich world with numerous different paranormal creatures. The world-building was very intense and seemed to drag down the story in the beginning. It took me awhile to get into the story, but once I did I found myself enjoying the different characters and the world itself. I think this new series has the potential to be an extremely developed paranormal romance, and I will be looking forward to reading more in the future.
I give First Light a C

Human Error by Eileen Wilks
The world of the Lupi is a wonderful urban fantasy series, and one that I’ve enjoyed reading for awhile now. However, I didn’t realize that I was a book or two behind, especially once I saw that my favorite growly enforcer Benedict found his mate. Arjenie and Benedict are headed back to her family home for the first time, and Benedict is a little worried about meeting her family. When a trickster shows up as well as skinwalker determined to hurt Arjenie’s family, Benedict will have to let his wolf loose to save his mate’s family. I really enjoyed this short. Benedict is one of my favorite characters in the series, and seeing him get his HEA is so awesome. Plus, the fact that Argenie is such a sweetheart and willing to fight for Benedict to the very end had me loving it even more. Plus, the fact that Wilks wrote in a skinwalker… Loved it! We don’t see enough skinwalkers in the urban fantasy genre!
I give Human Error a B

An Inconvenient Mate by Lora Leigh
I’ve read a few stories set within the world of the Breeds, but I’ve never read the series in it’s entirety. That being said, the novellas that I have read work as stand-alone books, as long as the reader understands that the stories are usually within a larger plot arc. I’ve always been able to follow the stories, however I’ve also always felt as if I was missing a little something. Like there is more going on behind the scenes with the characters that I am in the dark with. I felt this even more so in this novella than the others I’ve read. Isabelle and her Navajo family are going into negotiations with the Breed, and when Isabelle looks up from the bar one night into Malachi’s eyes, her world is changed forever. The two have an explosive sexual relationship and mate almost right away. But a stalker who has it in for Isabelle will try just about anything to hurt her, and nearly succeeds. While Leigh always has some super hot sex in her books, for me the plot felt like it fit within a full-length novel and left me somewhat confused and a little let down.
I give An Inconvenient Mate a C-

All in all I think fans of the World of the Lupi series as well as the Breed series will enjoy this anthology. The stories (that I read) were all very sexy, filled with action packed plot and fit well within the anthology. Overall, I give the anthology a C-
Tweet