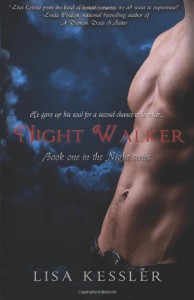 Publisher: Entangled Publishing
Publish Date: Out Now!
How I got this book: NetGalley

Kessler’s debut novel Night Walker is one that readers may struggle with. Kate has moved back home to San Diego to run away from her cheating ex-fiance. When she meets Calisto, she feels almost as if she knows him. The closer she and Calisto get, the worse her reoccurring nightmares of a woman’s death get. But she can’t not be with him.

Calisto has waited for the love of his life to come back, and the moment he sees Kate he knows. He will do anything to be with her once again, but when an old enemy sets his sights on Kate, Calisto might have to do the one thing he swore he would never do, bring Kate into his world of darkness.

I wanted to like this book, the cover itself pulled me in. I absolutely love it, and it made me want to give the reincarnation part of the story a chance. I hate to report that it didn’t do it for me. For some reason, I always feel like there is someone being left out of the reincarnation. Feelings are jumbled and there is jealousy and anger and I have yet to find a book that deals with it in a way that left me satisfied.

I think that if this book hadn’t focused so much on the reincarnation, I would have like it. The writing was solid, the characters were great, and the villain was beyond creepy. I just couldn’t seem to get past how jumbled the reincarnation seemed. Calisto repeatedly referred to Kate as “Tala” in his mind, which to me seemed like he was unable to accept Kate as who she is now, not who she was then. And when Kate found out she was his reincarnated love, seemed to accept it with no problems.

Because of that, I struggled a little with the romance between them. Kate’s reasons for falling for Calisto seemed non existent, instead she just kept referring to being compelled to be with him. To me, that doesn’t exactly lead to the greatest of love stories. With Calisto, it seemed as if he struggled with being able to see Kate and Tala as two different women. Like I said he frequently referred to them as each other, and kept comparing their similarities. I found their relationship to be more of a “destined mate” type (together because that’s what they are supposed to do.)

For those who do enjoy a good reincarnation love story, beware that the villain in this story is beyond creepy. There was a scene with him that was especially difficult to read, in which he showed just how malevolent and awful he really was. His actions were described in horrific detail, and while I could have done without it, I can see why the author added the scene in.

All in all I wasn’t a big fan of Night Walker. I didn’t get involved in the romance and love story between the characters. However, the writing was well done, so fans of this story-line should definitely check this one out!