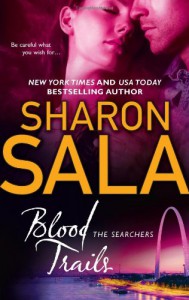 Publisher: HQN
Publish Date: Sept. 20th
How I got this book: NetGalley

I adore this series, absolutely adore it! I love the concept, and the execution is spot on as well! Sala has become one of my must-read suspense authors!

Holly is the last remaining sister at home in Montana after finding out the truth about her past. But she is afraid to go searching for the truth, partly because of how scary her father is, and partly because she would have to leave Bud, the ranch foreman and long time love of her life. But Holly knows she owes it to her mother to find out the truth, so she sets forth to find it.

Arriving in St. Louis isn’t what she expected, and neither is her father. But the police are receptive to her claims and quickly get started on working to find the truth. As things heat up with Holly’s sisters, Bud heads to her side to protect her, but even with his protection, will Holly be safe from the man who was her father, and St. Louis’ worst serial killer of all time?

This is the final installment of the Searchers Series, and probably my favorite. Bud has been instrumental in holding the sisters together as they each set off on their own journey, and seeing everything from the first two books play out from his perspective is awesome! Plus, watching him struggle with moving from a protector, older brother role to a boyfriend role was entertaining. But DAMN can Bud romance a girl!!

I really enjoyed Holly from the get-go as well. She stepped up at a young age and took over as the lady of the house. She cares for everyone and is so much softer and maternal than her sisters. I was anxious to see how that would all play out in the suspense aspect, and although Holly had a few moments that I thought were a little stupid, she wasn’t nearly as impulsive of a character as I thought she would be. I was worried that she would for sure have some TSTL moments, but instead she was more willing to play it safe than any of her sisters. I liked that about her.

The suspense portion of the plot was done really well. Although we know from the beginning that Holly’s father is the serial killer, he was creepy and just the right amount of insane and psychotic. I felt as if Sala probably did a significant amount of research on serial killers and their psyche, and it showed with how well she wrote the character. I was also happy with the way that story resolved itself, how Holly was able to step-up and really help put her father behind bars for life. It all came together, but not TOO perfectly.

The last few chapters were also devoted to wrapping up the sister’s stories as a whole, and I loved that. We got to see them all come back home with their men, and how they were ready to move on in life. I was hoping for more resolution, and loved seeing them come home together and share their experiences. There was one small detail that I felt was “too perfect” that didn’t sit well with me, but I don’t want to give anything away.

All in all I felt this was a perfect ending to the Searchers Series. Holly and Bud went from a great comfortable friendship to an amazing partnership as lovers. Their romance was fun and full of tension and sexy times. I loved every step of the way. Fans of Sala will not be disappointed!