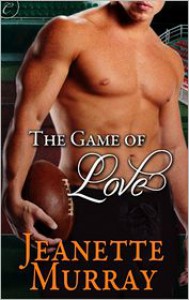 Publisher: Carina Press
Publish Date: August 29th
How we got this book: NetGalley

Lou: Nicole and I are big fans of sport romances, so when Nicole told me about this story, I agreed to a joint review coz’ there’s something about hot sports heroes that does it for me . Whilst it did feature a sporty premise, Brett and Chris are athletes that have now retired from their game. Brett has been coaching football, and Chris has just moved to his hometown and school to teach tennis at Northend High. Chris pretty much hates jocks due to an ex of hers, and Brett rubs her up the wrong way from their first meeting due to some inappropriate comments made by Brett’s assistants. Unfortunately, I had a lot of trouble warming up to Chris in the first half of the book because she was so aggressive and antagonistic towards Brett that I felt she kept kicking him in the balls verbally, and he just let her.

MinnChica: I had some trouble warming up to Chris as well, mainly because she came across as cold and mean. Our first glimpse of her is during Brett’s POV, and she is kinda a bitch. It wasn’t until well into the story that we get a little history lesson on her life and find out why she acts the way she does towards jocks. From there, I started to understand and like her a little more. But for me the thing that clinched it for Chris’ character was her way with the kids. I loved reading about a sports coach who went above and beyond for her students on both her tennis team, and other athletes. Then at the end when she was able to stand up for herself…. I likey!

Lou: It was only in the second half of the book that I started to understand and like Chris because her reasons were explained, and the fact that she realises she was damaging what could be a good thing with Brett redeemed her in my eyes. Whilst their romance was a little slow, it really did pick up in the second and latter part of the book. But whilst I warmed up to their romance, I had problems with some of the descriptions the author used and some of the over top reactions the characters had. I honestly lost count of how many times either the hero or heroine ‘breathed’ hard, how many times the heroine puked, and when you notice these things, it pulls you out of the story. I also had a ‘huh’ moment with Brett’s mom as she seemed to be the atypical small-town busybody mum — especially when she wanted him married so he could provide grandbabies for her. But the characters that I did love was Katie and Jared. Katie I thought was really funny, and her banter with Brett and ‘Cletus the fetus’ was pretty darn funny.

MinnChica: I liked Brett’s mom. Yes, she was not what I expected from a small town mother with only boys – all up in their business and love life – but she was also a strong matriarch. I love those kind of mother characters in books, I think they can add a lot of perspective to their children’s characters. I’m with you in that the secondary characters were almost more engaging and fun for me to read than the main ones. Katie with all her pregnancy jokes were HILARIOUS! I could just picture her waddling along throughout the story. I’ll admit though that I have a teensy tiny crush on Brett. The man was so damn open about his feelings, and yet a possessive alpha in his own way. So sexy……

Lou: I really liked Brett a lot more than Chris. He was just so open and nice, and even when his mum got into his business, he took it well. The way he opened up to Chris totally made him a sweetheart, and I felt like screaming at Chris, can’t you see how good he is for you! Stop acting like such a damn meanie. And whilst they grew closer, I still can’t make up my mind about the ending, and when Chris’ ex came into the picture. I’m torn between it was the usual/predictable tension/danger that’s added towards the end of a book, but it did actual kinda work as her ex was pretty scary without being a cartoonish character.

MinnChica: Yeah, their romance was definitely slow in the beginning, and then sped up quickly, only to be twisted tested in the end. I liked that Chris was so hesitant to get involved, but then even once she admitted to herself she was in love, she still seemed to be careless with Brett’s feelings. It was… awkward. I thought the end was good. I mean, it was no secret her ex was a little batty. While yes, it was predictable, it was also fitting end to the story. Especially the little twist with Brett and the minor injury he sustained.

Lou: Yeah, she was careless with Brett’s feelings, and I can understand protecting yourself, but if she wasn’t willing to go the long haul with him, I think she should have said no to smexy times with him as it was easy to see just how much Brett really loved her. I kinda wished that Chris realised that sooner rather than later. Overall for me, I think the author has promise, and for a debut, it was a nice read. I would definitely pick up another book by the author.

I give The Game of Love a C.

MinnChica: I agree that Chris could have handled a lot of things better. All in all though I enjoyed this book. I thought despite the few rough patches the book was very well done. The story moved quickly and covered a lot of great topics that I’ve never seen before in a contemporary romance. The secondary characters were engaging and kept things light and airy despite the serious undertone between the hero and heroine. I will definitely be looking for more from Murray in the future.

I give The Game of Love a B-
Tweet