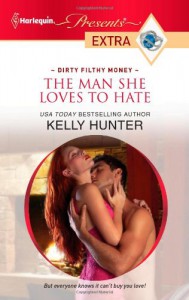 Publisher: Harlequin Presents
Publish Date: August 2nd
How I got this book: NetGalley

I’m not usually a huge fan of the Harlequin category romance books. I don’t know why, I just usually don’t read them, and the ones I have read, are usually only just so-so reads for me. Not great, but not horrible either. But everyone now and then one will come along that sounds interesting enough for me to pick it up and run with it.

Jolie Tanner was tossed aside by her best friend in grade school because of her mother’s affair with a married man. Since that day, Jolie has been a social outcast in town, and couldn’t wait to get far, far away. But when her mother’s lover dies, she comes back to town to provide support to her mom.

Too bad Jolie ends up stuck in the middle of a blizzard with not only the sexiest man alive, but also the son of the man who tore her life to shambles. Cole Rees hates what his father did to his family, and has always taken a little of his anger out on Jolie. But when she helps save his life on the mountain, he realizes there might be more to those Tanner women that just a sexy smile and killer body.

I had some mixed feelings about this one. There were things I really enjoyed about it, and there were things I found to be a little out of the realm of possibility, even for Harlequin. The whole ordeal with Jolie and Cole having to survive the blizzard, the gondola crashing into the avalanche and the trek back to a safe location was actually one of my favorite parts. It reminded me of what exactly people are able to do when put into extreme situations, and both of their characters really shone through in a positive light with how they handled themselves.

From there I went into a bit of disbelief when one moment Cole and Jolie are bickering and snarking on each other, obviously holding onto so much hate and anger. Moments later they are “sharing one kiss” which leads to smexy time and instantly back into glaring hatred. It was awkward and odd that such strong characters would let go of their convictions like that. It felt forced and completely out of character for both of them.

Once they get rescued and are forced back into the real world, I was impressed and happy with the way that Cole really backed Jolie, how he supported her in the face of the media, and thanked her despite everyone knowing about their bad blood. My heart melted a little for Cole in those moments, and he stuck out as one of those romance heroes you hope to meet and fall for.

The conflict between Cole’s family and Jolie was difficult to watch, and at times Cole’s own mother seemed so childish. While I know tons of adults can act like toddlers, for some reason I don’t always enjoy reading it, and was glad a lot of her conflict was kept to a minimum. I do hope that we get to see more of Cole’s younger sister Hannah, possibly she will get her HEA soon…

All in all I enjoyed this Presents story by Hunter. I’m always loving the enemies to lovers stories, and despite a few hiccups, Cole and Jolie’s relationship was fun and engaging to read.

I give The Man She Loves to Hate a B
Tweet