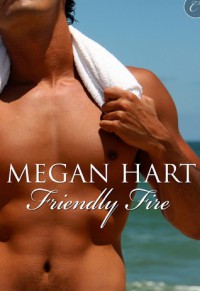 Publisher: Carina Press
Publish Date: 3/21/11
How I got this book: NetGalley


This is only the second book I’ve read by Megan Hart, but I have to say I actually found myself enjoying this book despite a few initial reservations I had.

Kendall Frasier is a DEA agent dealing with the loss of her partner. She is having to work through her issues of guilt and anger and confusion, and was given the choice between going to an island on the department or dealing with her issues at home. Wanting the beach and sun, she chooses to head to the island. But unfortunately for her, Zane Vincent the man who killed her partner in a round of friendly fire is also there during that time.

While Kendall is instantly attracted to Zane, she honestly doesn’t want anything to do with him. The guilt and anger over her partner are eating her up inside, and a relationship with the man who caused all her grief is the last thing she wants. But as she deals with everything that happened, she realizes that Zane might be able to provide for her in ways she never imagined.

My initial impression of this story was a little weary. This short 53 page story doesn’t have any chapters, and that quite honestly threw me for a loop. But I was quickly pulled into Kendall and Zane’s story. The issues that Kendall had to deal with in regards to losing her partner were very real and Hart portrayed them in a way that was easy to relate to.

That being said, I also thought that both Kendall and Zane were able to provide a lot for each other, and did a great job of really helping each other deal with their trauma. While an incident of losing someone is never easy, they were both able to really guide each other into acceptance, and that spoke to me.

The physical relationship between the two was very smoking, and although I’ve only read a few of Hart’s books, I know that I can count on her to provide a steamy hero and heroine who click on so many levels.

All in all, I give Friendly Fire 3 out of 5 island getaways!
Tweet