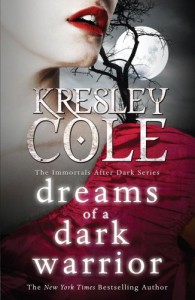 Publisher: Pocket Books
Publish Date: February 15th
How I got this book: Purchased

Kresley Cole’s Immortals After Dark Series is one of my absolute favorite paranormal romance series, and she continues with the eleventh installment, featuring the Valkyrie Regin, one of my favorites, and her reincarnated love Aiden, aka Declan.

Regin the Radiant left the comfort of her home as a young girl and met the love of her life Aidan at a young age. The two knew that they were destined to be together and feel deeply in love. But before Aidan could complete his battles and become an immortal berserker, he was killed by a vampire in their bed. Reincarnated every ascension, Aidan always comes back for her.

Declan was tormented by demons as a child, and spent his entire life hunting down and killing creatures of the Lore. When he captures Regin, there is something about her that draws him in. But his burning desire for her doesn’t stop him from treating her like a prisoner. Unbeknownst to him, there is a past and passion between the two that has the potential to destroy him. But when he falls in love with Regin on his own, will he be able to overcome death to stay with her forever?

I have to start off with saying that this was not my absolute favorite Cole book. I’ve been anxiously awaiting Regin’s story, wondering exactly how Cole was going to pull this one off. While I was super happy with the way some things played out, there were others that bothered me.

The thing that grated on me the most was that I didn’t think Declan really proved himself to Regin. I don’t think he really showed her or proved to her that he was willing to forego everything from his past, put aside all that hatred, and move on. I hate to say he got off too easy, because his own internal torment was obviously painful, but he didn’t have to prove himself to anyone in the Lore. I’ll even admit to hoping that Aidan would somehow prevail and Declan would float to the wayside.

I was very happy though with the way that Cole played out the curse. The way that Declan was able to become immortal, live happily with Regin. I don’t want to give anything away, but I was really happy with how Declan and Aidan and his constant deaths were all sorted out.

The big things I really liked about the story is the addition of some new characters. I loved Natalya, the dark fey cell mate of Regin’s. I hope that we get to see more of her in the future. I also enjoyed meeting Brandr and Thad. I know Cole has talked about a YA series, and hope that we will see some of the youngsters like Thad in that. I liked seeing more of Nix and Lothaire. While I’m not on the Lothaire bandwagon yet, I’m holding out hope that he’ll wow me in his book.


All in all, I give Dreams of a Dark Warrior 3.5 out of 5 reincarnated berserkers!
Tweet