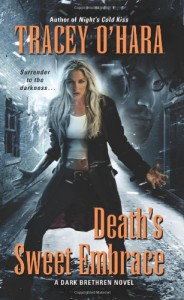 Publisher: Harper Voyage
Publish Date: Out Now
How I got this book: NetGalley


Kitt is back for the second installment for The Dark Brethren series. She is working at the academy as a teacher, finally getting the chance to meet her twin daughters. When the horrific murders start on campus, she gets pulled into the task force to track down the murder.

Kitt is reunited with the father of her children, Raven her one time lover and only love of her life. Although there is a price on Raven’s head, and Kitt has been ostracized from her family, the two will fight for the life and happiness of their daughters, as well as their own freedoms. But when the murder sets his sights on Kitt and and her daughters, will Raven and Kitt be able to save each other?

Death’s Sweet Embrace by Tracey O’Hara is finally out, and was one I was looking forward too. I really enjoyed the first book in the series, and was anxiously awaiting this one. I have to say though, I really wish that I had re-read Night’s Cold Kiss before reading this, because the whole first third of the book or so, I was completely lost.

So, although it took me awhile to get back into the story, once I got back into the flow of the world building, I got sucked completely into the story. It would have been very very helpful had O’Hara done some more world building explanation, even though this is the second book in the series. It’s always nice for a refresher, especially since there can be so much time between two books.

Kitt really captivated me, and the story surrounding her past with her husband, Raven, her children and family was so complicated and intertwined with the suspense of this book. I found myself really being able to relate to her, because Kitt just wanted to make everyone happy. She wanted her daughters, her father, Raven and everyone else in her life to be happy, and was willing to sacrifice so much.

There were times when I wanted to smack Raven, because he was driving me crazy. Although he was more than capable of taking care of himself, the fact that he didn’t seem to care about Kitt concern for his life annoyed me. He wanted her to do everything he said and asked, but at the same time, wasn’t willing to give her the same courtesy.

The suspense plot was very well done, and I was kept guessing until the last minute. And l loved it! It tied into Kitt’s history and present so well, and fit with the overall story so well, it was probably my favorite aspect of this story. The romance between Kitt and Raven was also well done, and although there were times I didn’t think they would make it (or even want to for that matter), they were finally able to find a way to both get past their pigheadedness and agree to make it work.

I’m excited that it seems as if Kitt and Raven’s twins will play a large role in the series as a whole. I am really liking the way that the series seems to be progressing, and look forward to the next, however I might have to do a refresher before.

All in all, I give Death’s Sweet Embrace 3 out of 5 shifting cat and wolf twins.
Tweet