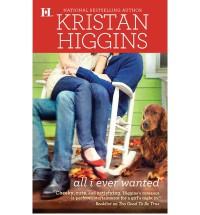 The first Kristan Higgins book I ever read was Too Good To Be True and the moment I read the last word, I knew that Higgins would become one of my favorite contemporary romance authors.

In All I Ever Wanted Higgins takes us for a wild ride while we follow Callie and her search for the perfect ever after. We meet Callie on her 30th birthday, find out she is desperately in love with her boss, who is obviously stringing her along. He breaks her heart by admitting to having a relationship with another woman, and Callie freaks.

Callie runs into a rude stranger, who she later finds out is the new and eligible vet, Ian. Callie does a great job of continuing to embarrass herself over and over while in Ian’s presence. After a few horrific dates with internet matches, Callie manages to become friends with Ian.

This was not my favorite work by Higgins. I felt as if it was more a story about Callie getting over her lifelong crush, finally taking a stand for herself, and finding real love along the way. While that is great and done extremely well; I felt kinda jipped that I didn’t get more time to get to know Ian. He was this incredible mysterious and angry character, and I would have loved to have been able to explore more of what made him tick. At one point, I looked down at the page, realized I was almost a third of the way through the book, and we had only meet the broody Ian twice. I felt as if the relationship between Callie and Ian had to take a supporting role, because so much of the book was spent on just Callie and her quirkiness.

That being said, I absolutely LOVED Callie. She was such a conflicted character. There were times I wanted to shake her, and other times I wanted to give her a huge hug. The inner dialogue Callie had was absolutely incredible, and frequently had me cracking up. I could vividly picture this sweet little Callie with a little angel sitting on her shoulder (played by Mrs. Michelle Obama) facing off with the devil (played by Betty Boop). The exchanges were absolutely classic!

In addition to Callie, the featured secondary character Noah, Callie’s snarky grandfather who she lives with, provided incredible comedic relief throughout. He was so funny, and his character defiantly brought out a caring and nurturing side of Callie. Noah embodied the angry and bitter old man, who still has a great heart of gold, although he tries desperately not to show it.

Higgins has proven herself yet again, and if anyone is looking for a light hearted read, with only a little bit of romance, and a lot of personal discovery, this should be added to your “to be read” pile.

All in all, I give All I Ever Wanted 3 out of 5 rocking chairs.
Tweet