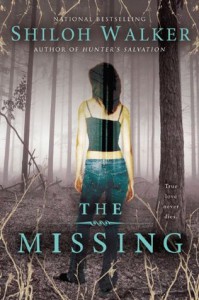 The Missing was release in mass market paperback in July, and let me tell you, if you have not picked up this book, you need to. The book is essentially divided into two part, the first being when Taige and Cullen first meet as kids. Taige is a local girl, living in the small town with her psycho uncle where Cullen’s parents have a summer home. The two meet on the beach, fall in love, and spend their summers together.

During that time, Taige confides in Cullen about her psychic gift, which allows her to see tragic events, and in some cases stop them. Together, the two actually save a few lives. When Taige and Cullen grow up a little and suddenly become series, Cullen’s mother is brutally killed, and he takes his anger out on Taige, claiming she should have been able to stop it.

Flash forward and part two starts, Taige is consulting for the FBI, helping to find kidnapped children, and Cullen is now a father to a little girl. When his daughter is taken, he tracks down Taige and begs her to help find his baby. The two track down a killer who appears to be focusing on those with psychic abilities.

With Taige on the case, the two realize that what they gave up at nineteen might have been something that should have lasted forever. Together they rescue Cullen’s daughter, find the killer, and rekindle the passion that never left.

After reading The Missing, Shiloh Walker has solidified herself as one of my all time favorite authors. She is incredible no matter what she writes. Suspense, paranormal, contemporary, it all rocks my world.

I loved Taige’s character. She was hurt from a childhood of pain and suffering, orphaned as a child and sent to live with an uncle who things she is a devil because of her gift. She has been beat up, put down, and walked all over her whole life. She is hard, and reclusive, and flawed, and for that I adored her character.

I was really happy that when Cullen came back into her life, she didn’t just roll over and forgive him, she made him work to gain her trust and love again. I was glad to see she didn’t just trip back into his arms after all he put her through.

I also loved that Walker didn’t give too much away while tracking the killer, she revealed just enough to keep me on my toes, and the story still moving. My jaw just about dropped to the floor when I realized who the killer was, and what it would do to Taige. Amazing!!

The suspense was killer, the passion between Cullen and Taige was smokin’, and the story was incredible! I am now anxiously awaiting the 2nd installment of this series, which Walker said is in the pipeline, currently titled The Departed.