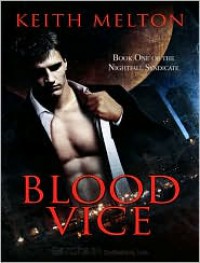 Karl Vance is a mafia hit man, recruited by the Ricardi family to assist with taking over Boston by whacking off the Lucatti family one by one. He is ordered to work under Maria, the Ricardi family princess and money launderer. Little do Maria and her father know, but Karl is also a vampire, in Boston with the hopes of finding his nemesis, Alejandro Delgado.

As Karl and Maria work together to start taking out the Lucatti family one by one, clues begin to unravel to Maria about Karl’s life, and she soon finds herself immersed in a world that thrives in the night. With Karl and Alejandro fighting on two different sides of the mafia world, Maria finds herself stuck in the middle.

Once Alejandro makes Maria his vampire slave, he forces her to do things she never thought or imagined possible. Karl will do everything in his power to help her, and together they just might prevail.

Keith Melton goes all out in this thrilling urban fantasy mafia crime drama featuring a sexy vampire, a mafia princess, a mysterious and powerful daytime guardian, and a crazy holy army.

Usually I am all for authors who take the stereotypical vampire myths and put all sorts of spins on them, making it new and fresh. But Melton really came through for me with his old school vamp ways. I love that Karl is such a badass, even while under so many constraints. Sure he only goes out after sundown, kills in order to live, and has to rely on a woman to watch over his coffin during the day, but he totally rocks it!

I had a little bit of a hard time relating to and liking Maria. Sure I can totally understand her desires to climb the family ladder, and her frustration with the gender stereotypes in the mafia way of life. However, the first part of the book she was so concerned with proving herself as being able to live in that world, that she seemed almost too hard to me. She was so wrapped up in wanting to kill someone to prove to her father she would make a good Mafioso, and that really turned me off to her. But, Melton was able to redeem her a little by having her struggle with the brutality of becoming a vampire and having to kill, even when she needed it to survive.

The conflict between Karl and Alejandro was great, and their few encounters totally rocked. I loved that the two of them represented good and evil, battling it out for supremacy. The fight scenes were hard hitting throughout, and although I’m not a huge fan of the mobster way of life, the mafia undertones totally rocked. For all those mob lifestyle fans out there, this book is a Don’t Miss!