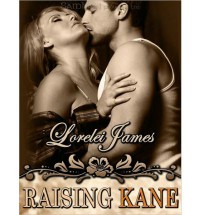 Raising Kane is the 9th book in the Rough Riders series. James has become one of my favorite smut authors with this series. While the first book, Long Hard Ride had me blushing at every turn of the page, this series has really grown and evolved into so much more than just smut.

Kane, one half of the McKay identical twins, has been acting as a Big Buddy to Hayden for almost two years. He has also had a huge crush on Hayden’s mom Ginger for just as long. When Ginger slips and falls, needed help at home, Kane jumps at the chance to be around and take care of her. Little does Kane know, Ginger has also been crushing on him as well.

For almost a week, Kane lives with Hayden, Ginger, and her disabled father. The steam between these two is sizzling within hours of Ginger arriving at home. While Kane is anxious to jump into bed with her, he is more concerned for her health. However, it doesn’t take much for Ginger to convince him otherwise.

While Ginger asks Kane to keep their relationship a secret, Kane is frustrated he can’t claim her in front of his friends and family. Especially since his playboy past is constantly being thrown in his face. Thankfully, after a few misunderstandings, the two finally find a way to move on from their pasts, and continue on their future together.

Now, I’ve been counting down the day’s for Kane’s book (and stayed up till almost 2am finishing it) since his twin brother Kade found his happily ever after in book 4. I loved the fact that Kane has really grown up from his partying ways, and truly wants to prove to Ginger that he is ready to take her as his wife, be a father to her son, help take care of her father, and start a family of their own.

Ginger is a control freak lawyer, and I enjoyed watching her struggle to accept Kan as a partner in life, and a boss in the bedroom. I know so many who could really relate to that struggle with accepting someone once you’ve done everything on your own. The dynamics between Kane and Ginger are explosive, but the build up to their relationship is based on a great and long friendship, which I think is so special.

Some of the McKay and West cousins play a more supporting role than the other McKay brothers we’ve already met and love. I am now counting down the days until November, when James releases book 10, Cowgirls Don’t Cry, the story of Jessie and Brandt.

All in all, I give Raising Kane 4.5 out of 5 helpful sexy cowboys!
Tweet