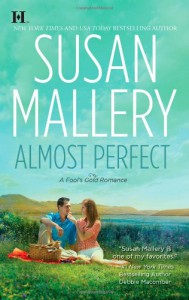 Almost Perfect is the second book in the Fool’s Gold Series, and tells the story of Liz, local girl from the wrong side of the tracks, and Ethan, oldest son of the Hendrix family, one of the founders of Fool’s Gold. In high school, Liz is the poor social outcast, and while Ethan takes a notice to her, he wants to keep them a secret. After a devastating betrayal, Liz flees town by herself, heartbroken and pregnant.

Flash forward eleven years, Liz receives an e-mail from her nieces she never knew she had, and is forced to come back to Fool’s Gold to take care of them. Her first day back in town she runs into Ethan, and finds out that Ethan never knew about their son. The two constantly fight regarding their son and are forced to find a way to deal with parenting, the attraction between them, a crazed stalker fan, and their shared past mistakes.

I loved the second installment in this series, and frequently found myself wishing I could give Liz a hug and a lecture in women to Ethan. One of the reasons that I find Mallery’s books so appealing, is that her characters are so incredibly real. They have flaws, they carry heartache, they act rashly, and they don’t waiver on their beliefs.

Given Liz’s history, I found her to be an incredible character. The whole “making yourself from nothing” is so well done, and the baggage that Liz carries makes her that much more lovable and believable as a character. I found myself tearing up at times, thinking of what I would have done in her situation.

Although Ethan has some series trust issues with Liz, he really does try hard to be a good father to the son he never knew he had. While he has genuine feelings for Liz, he does a really crappy job of portraying them, and reminds me of so many men I know in my own life.

I was really happy with the way the story resolved itself, and how Liz and Ethan were able to work something out. It didn’t seem fake, or false, and was absolutely perfect the way Ethan put himself out there. A definite winner!

While I wish we could have seen more of Josh and Charity, this book featured more of Pia, the heroine in the next Fool’s Gold book. I have been in love with her since the first book, and can’t wait to see how she is going to deal with loosing her best friend, trying to grieve and find love at the same time. I just know it will be another huge hit in the Mallery back log.

All in all, I give Almost Perfect 4.5 out of 5 stars
Tweet