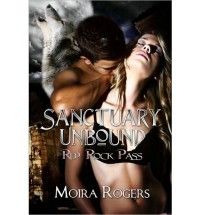 The dynamic writing duo known as Moira Rogers aka Bree & Donna, have finally come out with their must anticipated Vampire Lumberjack Romance, Sanctuary Unbound. Now, I’ll be honest when I first heard about the vamp lumberjack, I was hesitant… but oh the jokes are hilarious and the story works!

Adam Dubois recently left his secluded cabin in Maine to join the heroes in Red Rocks to try and fight off the newest threat: a power hungry vampire feeding off a wolf pack. Adam has a little bit of knowledge with how to fight this kind of power, and teams up with local wolf doctor Cindy to do everything he can to help out.

Cindy and Adam’s instant attraction throws them both a little off guard, but with them both being a little lonely, they decide to not fight it and take a chance on each other. They both must take a hard look into their pasts, and overcome some dark times before they are comfortable moving on and starting over together.

Being the huge fangirl that I am of Moira Rogers, I’m totally addicted to all their series! I enjoyed watching the characters of Red Rocks really coming together to defeat this latest enemy. I hated seeing Gavin, the awesomesauce alpha, getting to an older stage, but loved Keith stepping up and taking over.

I loved Adam, I thought he was such a great hero. Our poor vampire lumberjack did a great job at playing the reluctant hero, and the poor guy had a real warped view of his good deeds in life. I just wanted to give him a big hug, pat his back reassuringly, and sing his praises throughout.

I wish I could say that Sanctuary Unbound was my favorite, (because really… vampire lumberjack, what’s not to love?) but unfortunately, for me, this book didn’t live up to the first few. Maybe it’s because I was never a fan of Cindy, although she really did do a lot to redeem herself in my eyes this book.

To me, if felt like this book was the end of the series, and I know that there are currently no additional books in the works for our current Red Rocks characters. I am looking forward to The Building Sanctuary Series, featuring Seamus and Joan, who were featured throughout.

All in all, I give Sanctuary Unbound 3.5 our of 5 Vampire Lumberjacks!
Tweet